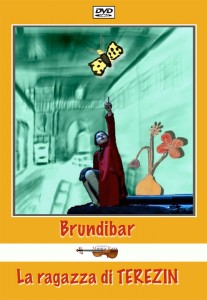 Trama:
Brundibar
Act One.
Two children, Aninka and Pepièek, are walking in the middle of the street of a small village. They introduce themselves to the audience: Father, being a soldier, is far away from home and Mother is very ill. The doctor has told the children that their mother will get better only if they can buy her some milk. Meanwhile the street begins to fill up with people; there is a policeman, who advises the two children to find a job, the only way to earn enough money to buy milk for their mother; there are the milkman, the baker, the ice cream man , all surrounded by people busy with their own purchases; and last of all there is the organ grinder, Brundibàr, who manages to earn lots of money by singing in the square. Aninka and Pepiéek al so have a go at reciting a nursery rhyme hoping that people will watch them and be generous, but without any luck; they are even ill-treated by the arrogant Brundibàr who wields his stick and says the square is his.
Discouraged and disheartened by the unfair behaviour of the organ grinder and feeling a little scared at the prospect of the dark night in the cold, the children fall asleep. Three animals – the Sparrow, the Cat and the Dog – decide to help them; the following morning they will call all the village children to help Aninka and Pepiéek defeat Brundibàr. They then break into a gentle lullaby.
Act Two.
Day is breaking; the ani mals wake the two children. Having said good day to one another, Aninka, Pepiéek, the Sparrow, the Cat and the Dog go to the school to enlist more children. The school children back the idea; they will join the brother and sister to form a louder choir, so loud it will drown the voice of Brundibàr. When the lessons finish, the children join the group and begin to sing, disturbing Brundibàr and his barrel organo The crowd listens attentively to the new group. Aninka and Pepiéek find a lot of money in their cap but the wicked Brundibàr, full of envy and resentment, succeeds in extorting from the children their earnings. Then all the village children give chase to Brundibàr; they recover the cap with the money in it and force the enemy to flee. The opera ends with a song of victory in which all the children and the animals take part; the village square belongs to them once more.

The girl from Terezin
The documentary entitled The Girl from Terezin is a short feature filmed in 1997 in the basements of the Teatro Comunale of Florence during preparations for the performance of the children’s opera Brundibár by the Czech composer Hans Krása, in the version rewritten in 1943 for the children in the Nazi concentration camp of Terezin (Theresienstadt). The film was sponsored by the ANED (National Association of Ex Political Deportees from Nazi Camps) in collaboration with COOP Lombardia and the COOP of Florence, and the Teatro Comunale itself.
Conceived and directed by Valerio Finessi, the video project follows an imaginary tale of a little girl from the Terezin camp who suddenly appears in the basements of the theatre where the opera Brundibár is being staged, and she tells the children performing in the opera the story of her life in the camp. The film involved several pupils of the Music School of Fiesole, who were already part of the production of Brundibár, and the idea was to find a way of giving the new generations in elementary and secondary schools a chance to learn about the death of hundreds of thousands of children in the Nazi extermination camps. The method was not to supply preset answers or use existing texts, but to induce the children to empathise and foster an awareness of the tragedy that swept through Europe, and help them reflect on questions of tolerance and diversity, which are becoming increasingly vital in today’s world. Thanks to the efforts of the Associazione Musica Rara, this short documentary accompanying the opera Brundibár on DVD makes it possible to keep the new generations aware of argument, now that the very people who lived and suffered those horrific events are – for reasons of their advanced age – rapidly diminishing. By planting in their hearts this seed of truth, today’s children will never permit that such horrors against humanity ever occur again.